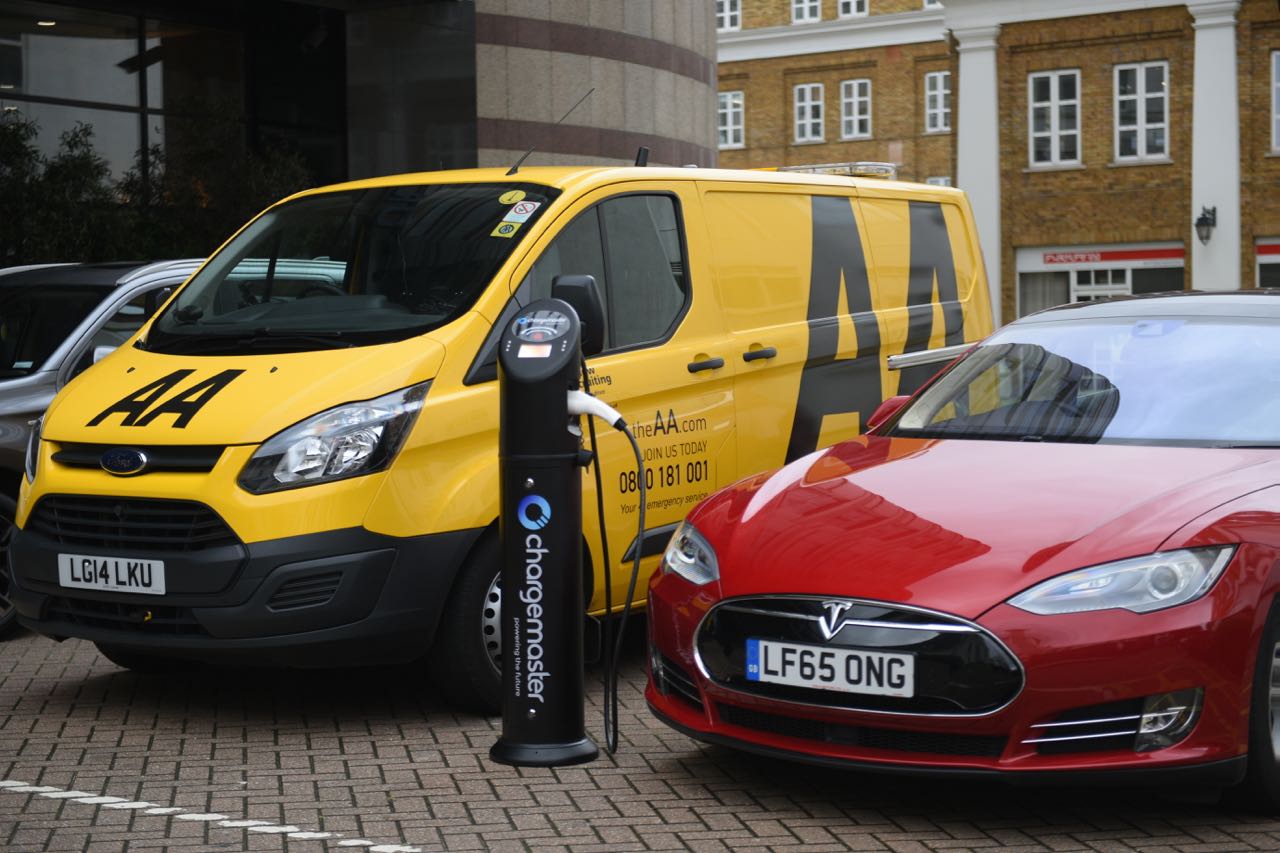 The UK is at a tipping point, with electric car sales set to soar, once drivers overcome the many myths or misconceptions, according to new AA research.

The AA expects that, based on AA members’ car buying intentions (1) and future trends, there will be more than 500,000 electric and plug-in hybrid vehicles in use by 2020. Helping to dispel some of the myths associated with running such cars in the interim, could increase this projection dramatically.
Ready to help drivers make the most of the EV revolution and cut their motoring costs, the AA has teamed up with Chargemaster to provide advice, support and access to a UK-wide network of chargers.The first of its kind in the UK, the new partnership between the UK’s biggest breakdown organisation and the UK’s leading provider of charging infrastructure and services will deliver a range of benefits, including bespoke home charging units, access to thousands of charging points and preferential charging rates.With the sales of new ultra-low emissions vehicles (ULEV) doubling in over the last year, and 63,000 drivers taking advantage of the plug-in car grant, the AA and Chargemaster expect the market to grow substantially, contributing to the EV revolution as buyers overcome their misconceptions.

The road ahead for EVs

Looking to dispel the many myths regarding electric vehicle ownership the partnership will facilitate a rapid expansion of the number of domestic and public charging points in the UK.

With over 4,000 POLAR charging points online today, and 500 new locations in 2016, Chargemaster has undertaken a multi-million-pound investment to expand the UK’s charging infrastructure. Chargemaster is currently rolling out 40 of its latest technology 50kW Ultrachargers in London which will charge an EV in less than 30 minutes and this will more than quadruple the rapid chargers inside the M25.

These moves by the AA and Chargemaster will further reinforce forecasts by the government and industry-funded campaign, Go Ultra Low, which this week forecast that by 2027 more than half of annual car and light van sales will be electric. This would amount to over 1.3m annual electric vehicle sales per annum.

The partnership comes at a time when more local authorities are looking at Ultra Low Emission Zones and the Government has an aspiration for virtually all vehicles to be ultra-low emission by 2050.

However, despite this expansion, many motorists remain in the dark. Nine out of ten drivers are not aware of Government grants to cover up to 75% (£500 max) of home charging point installations and 96% over-estimated or didn’t know the cost of home charging points, according to a new AA Populus study of 21,877 drivers.

The AA research shows that old perceptions of the barriers to ULEV ownership are holding back market growth. An earlier AA Populus poll identified the top five misconceptions about EV ownership.

Government grants are available to motorists of up to £4,500 off the list price of a new EV, meaning they are much more reasonably priced than you might expect. Many plug in hybrids are already priced at a very similar price to the equivalent diesel.

There are more than 4,000 publically accessible charge points available in the UK through Chargemaster’s POLAR network alone and a further 500 will be added in 2016. This means that motorists are never far from your next charge.

It can cost as little at 2p per mile to power an EV, while drivers pay no vehicle excise duty (VED) or congestion charge in London. Fleet drivers also benefit from Benefit in Kind (BiK) savings, meaning motorists stand to save significantly.

Batteries in older EVs are already aging much better than engineers had ever predicted, so owners are finding that battery durability is much better than expected. Many EV car manufacturers are now providing battery warrantees of around eight years.

National statistics show that 95% of car journeys are under 25 miles while 32% of UK households have two or more cars. Increasingly, new EVs coming on to the market have an extended battery range. Within two years it is expected that the norm will be around 200 miles on a single charge.

The AA has partnered with Chargemaster to enable:

Edmund King OBE, AA president, says: “We think that the EV revolution is about to take off and we want to help consumers understand the benefits of low cost, low emission driving and to show them it is accessible and affordable. Per mile driven an EV is five times cheaper than the average petrol car and carries no vehicle excise duty.“Modern electric vehicle designs and performance are comparable to conventional internal combustion-powered vehicles. Concerns and regulations about diesel emissions may also prove to be a tipping point. “Sales of new ultra-low emissions vehicles (ULEV) doubled over the last year. And 63,000 drivers have taken advantage of the plug-in car grant. We expect the market to grow substantially, as buyers overcome their misconceptions.“The vast number of car journeys are under 25 miles and a third of households have two or more cars. Hence, we estimate that more than two million second cars could be electric tomorrow, with no disadvantages and many cost-saving benefits.”The AA’s research** also shows that if drivers owned an electric vehicle, three-quarters (75%) would expect to charge it overnight, mainly at home while a quarter (25%) would rely on public charging points away from home.David Martell, Chargemaster CEO, points out that a significant barrier to electric vehicle ownership is concern that when they reach their destination, drivers will not find a charging point available. This worries 81% of respondents to the AA’s research.“We want to change that perception,” he says. “This new relationship with the AA will see hundreds more AA branded charging points installed. They’ll go in at AA-rated hotels and other accessible public places such as supermarkets, public car parks and town centres while we will be embarking on a public awareness campaign to show that charging a vehicle at home is neither difficult or costly.”The AA study showed that drivers have serious misconceptions about how long it takes to charge an EV as well as the availability of government incentives to not only pay for a new EV but to install a fast charging point at home.David Martell points out: “Despite extensive publicity only 8% of over 21,000 respondents to the research realised that government grants are available to install a domestic electric vehicle charging point.

“In fact, the cost of a charging point attracts a £500 grant towards the typical £800 cost – meaning that a reliable, fast electric vehicle charter can be installed for around £300. This shows we have much more to do to spread the word.”

Edmund King adds: “The facts speak for themselves.

“The cost of electric vehicles is coming down and the £4,500 government grant helps make them competitive.

“Myths about batteries not lasting long have been blown away by use. Some of the earliest models have clocked up very high mileages with almost no diminution of battery capacity.

“Modern EVs have a much greater range and battery technology is advancing as fast as the cost is falling. Most family saloon cars will drive for 80 to 100 miles without difficulty, well over the average journey length.

“EV performance is startling – top-range vehicles will accelerate faster than sports cars and provide all the creature comforts.

“This is the future of motoring and we are proud to be launching this initiative with Chargemaster today. Now is the time to charge up the EV revolution.”